“At all times, churches reminded people of the heavenly world, the path to which begins here on earth,” says Parish Council Chairman Igor Lysov.

When the decision was made to build a church, there were no churches in Teremki or the adjacent part of the Holosiivskyi district. Mr. Lysov decided not to make it a “typical” project, but to build a unique architectural masterpiece. The church building had to be filled with light, to look modern but at the same time traditional. 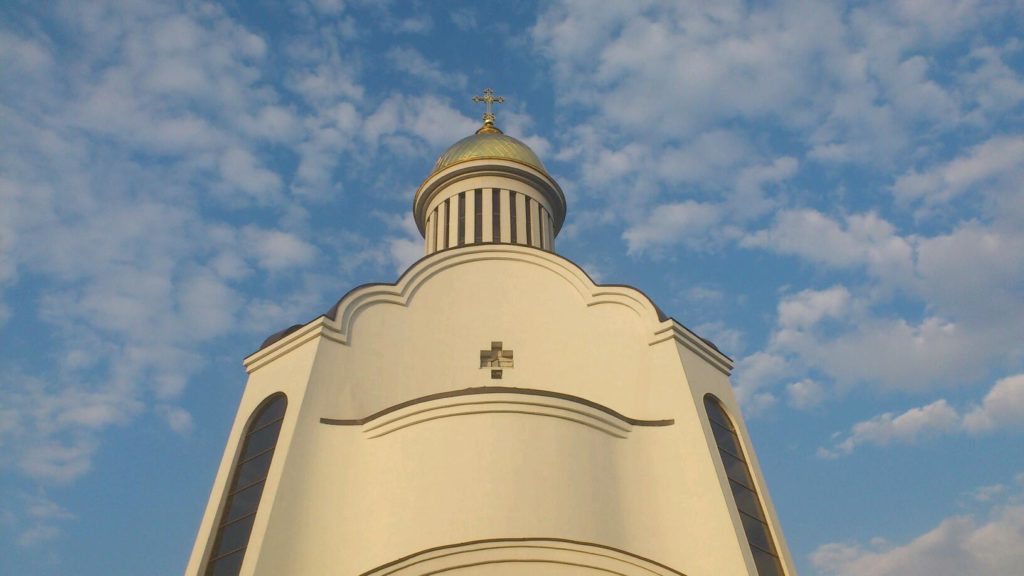 The inspiration for the name of the cathedral came from a church at the peak of Mount Athos (2033 m above sea level). At the top of this mountain, which rises above the Greek peninsula which is a monastic republic and the heritage of the Mother of God there is a small church named after the Transfiguration of the Lord. From there, Igor Lysov himself brought to the cathedral its first relic: a stone from the top of Mt Athos. The stone is today embedded in a mosaic image of the table in the composition “The Eucharist (Communion of the Apostles),” which is in the altar apse of the cathedral. 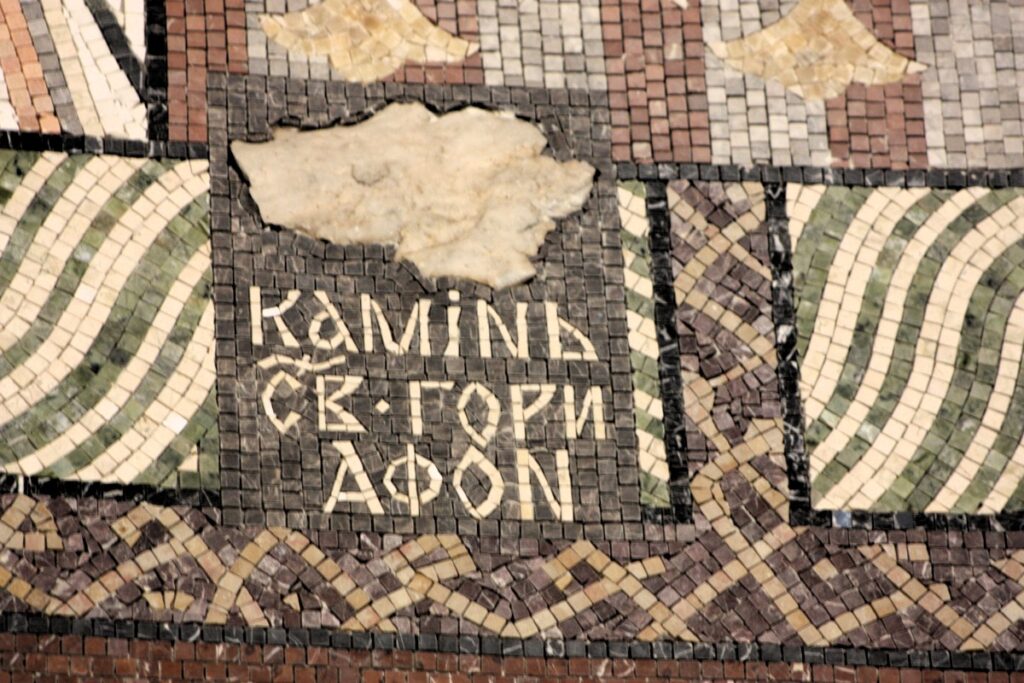 The Neo-Byzantine architectural project testifies to the evolutionary development of Ukrainian church building in line with a living tradition based on the finest historical masterpieces. The architectural idea of ​​the cathedral is based on the brilliant works of ancient Russian masters who built churches in Kyiv, Chernihiv, Veliky Novgorod, etc. The image of the cathedral is a testament to the continuous connection of the times and the modern echo of the brilliant architecture of the Church of the Intercession on the Nerl River and the Catherine Church in Chernihiv. This architecture is characterized by purity of form, the perfection of proportions, and the lightness and elevation of the lines. The 43-meter-high cathedral forms an arc with its bell tower, balancing the overall composition and adding to the integrity of the architectural ensemble. The architectural design principle of the cathedral complex is holistic, not overloaded with small details. The cathedral stands above the park as if it were carved of a single piece of white stone. 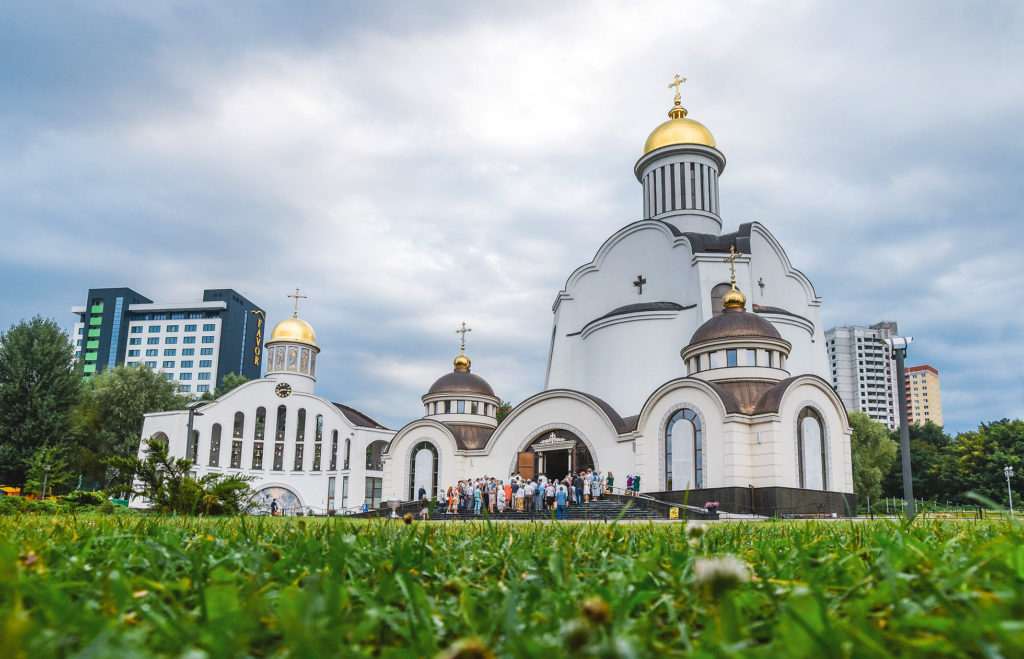 The work began after the project was approved. The first difficulty encountered by the builders was building the foundation. The soils in the Teremki area of Kyiv are very unreliable. The main bearing layer consists of clay, at a depth of more than 20 meters. The designers decided to put the cathedral on a foundation using piles to bear the load of the building. This foundation is designed to withstand heavy loads both vertically and horizontally, even in conditions of unstable flooded soil.

The foundation stone for the future cathedral was blessed in 2005 at the Kyiv-Pechersk Lavra by its vicar, Archbishop Paul of Vyshgorod. The then-mayor of Kyiv, Oleksandr Omelchenko, took part in the capsule-laying ceremony for the foundation of the Cathedral on the Feast of the Protection of the Theotokos in 2005. 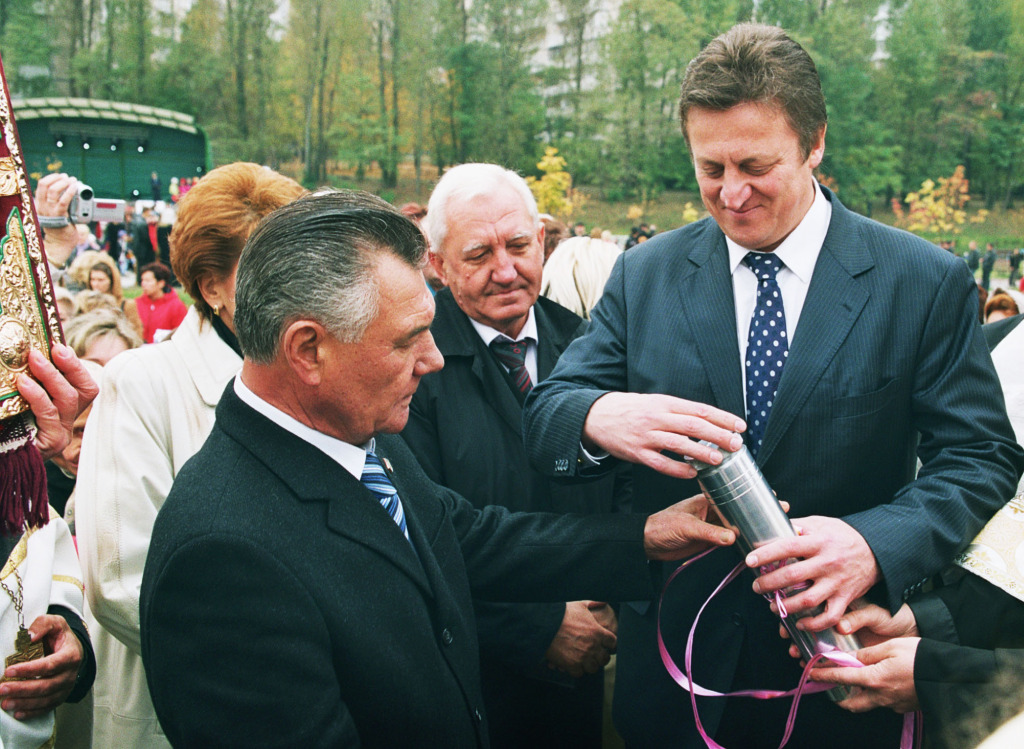 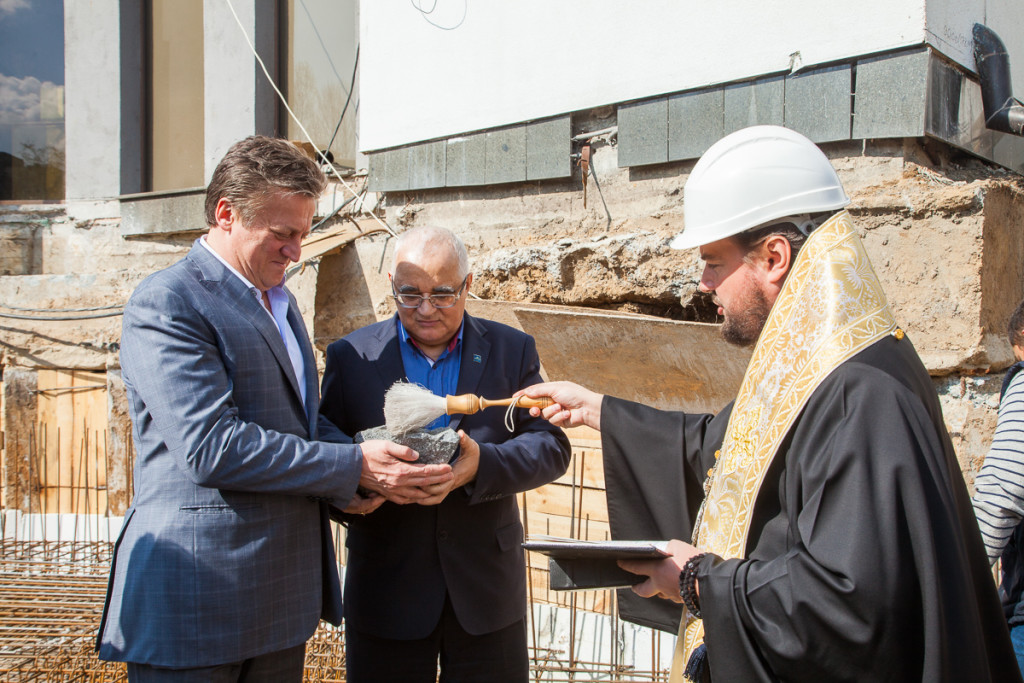 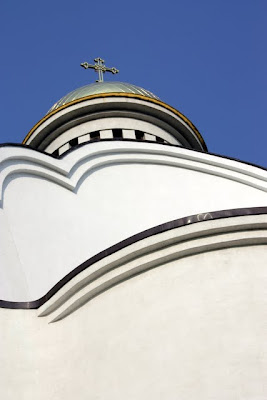 The walls of the cathedral are poured concrete. This is a convenient and practical material allowing strong designs of any shape, including curvilinear. The cathedral has four apses on its four sides. The founder of the cathedral desired to make the church as bright as possible. For this purpose, narrow arrow-shaped windows were placed between the apses, reaching to the full height of the walls, up to the dome. At the peak of each apse, the walls are pierced by cross-shaped openings glazed with transparent glass blocks. This architectural approach creates a soft play of light in the interior. Sunlight does not enter the apses directly but concentrates in the center of the inner space. The cathedral is filled with light as if from within. 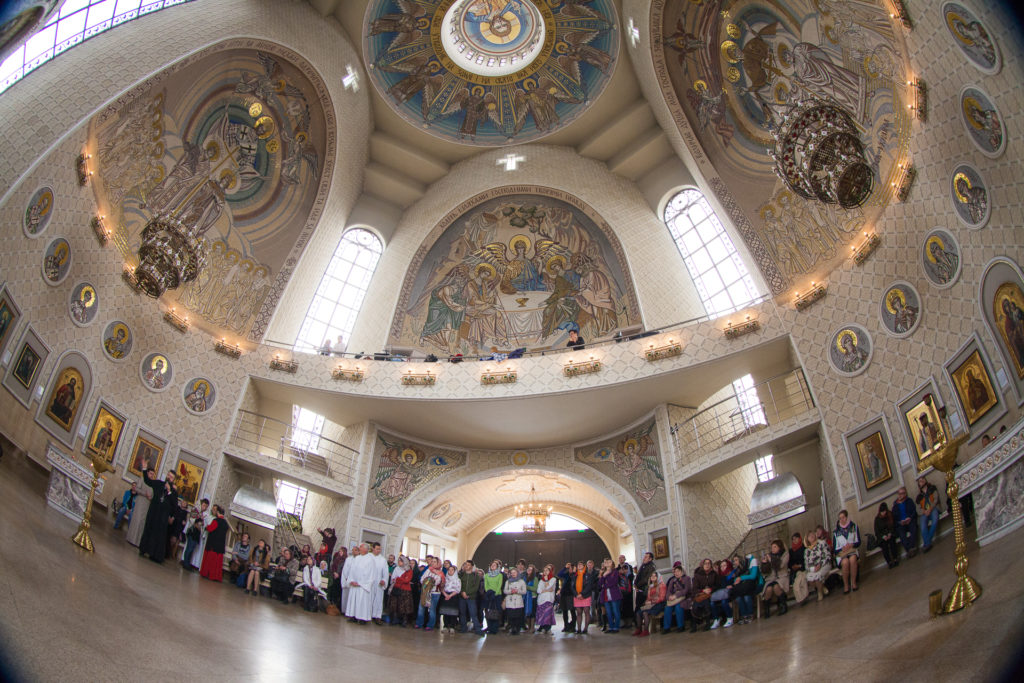 Geometrically, the church is a combination of convex and concave surfaces. The bold radius to which the windows converge is smaller than the radius of the floor, so the central space of the cathedral narrows slightly upwards. This architectural feature demonstrates the elevation of the faithful community to heaven. The church seems to be detached from the earth and ascending towards the glory of God. This form is enhanced by steps formed into  the pendentives (the sections of vaulting that transition from the cylindrical dome to the square shape of the church below).  These steps, a symbol of two-way movement (the descent of God to man and the ascent of man to God), are first encountered in the vision of Jacob the forefather (Genesis 28:12). It is a symbol of the covenant. Jacob saw stairs reaching from earth to heaven, and the angels of God went up and down on them. The dialogue between God and man takes place in the Church, and especially during the Divine Liturgy celebrated in Christian churches. 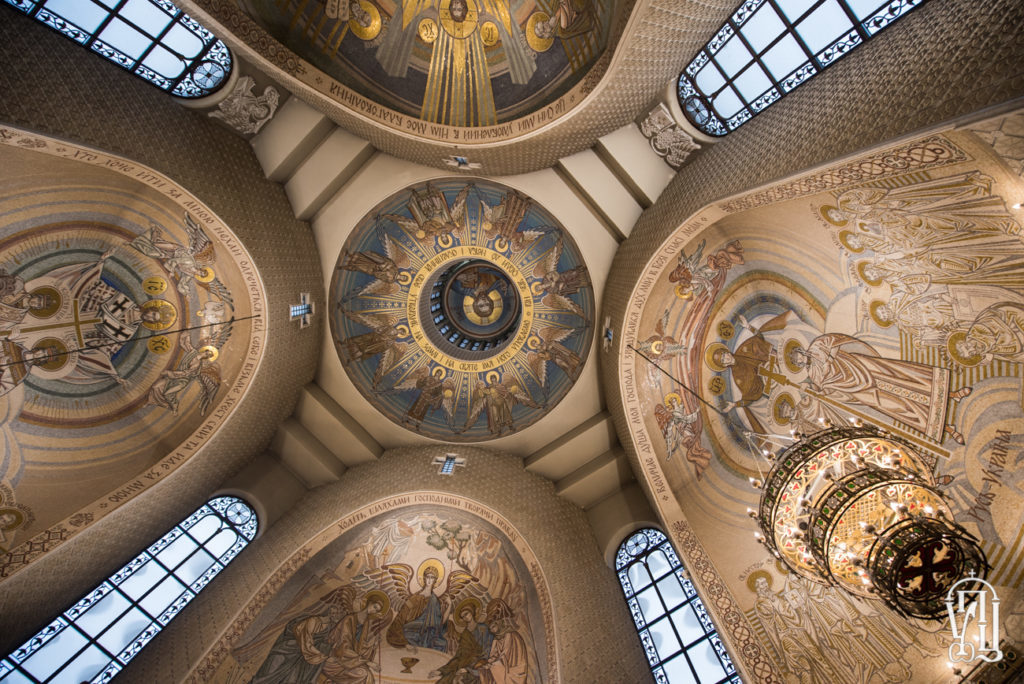 The walls of the cathedral are covered from inside with rhombus-shaped tiles made of perlite. The seams between the tiles are laid with a rope made of synthetic material, and the places where seams intersect are covered with perlite sockets. This interior arrangement is the only one possible for surfaces with no straight lines. The rhombus-shaped tile is the best for covering radial surfaces. Perlite is a material resulting from the hydration of obsidian (volcanic glass). The structure of this mineral is characterized by spherulites formed when the volcanic glass cracks during cooling. Before use in construction, perlite is crushed and heated in a furnace. When the material is heated above 120°C, water evaporates, leaving large pores that make the material itself very light. Its porosity can be up to 40 percent. The perlite is then mixed with high-quality cement to create a lightweight breathable non-flammable facing material with high thermal and sound insulation properties. Perlite does not deteriorate over time or require updating or painting. On the contrary, its texture becomes even more expressive with time. 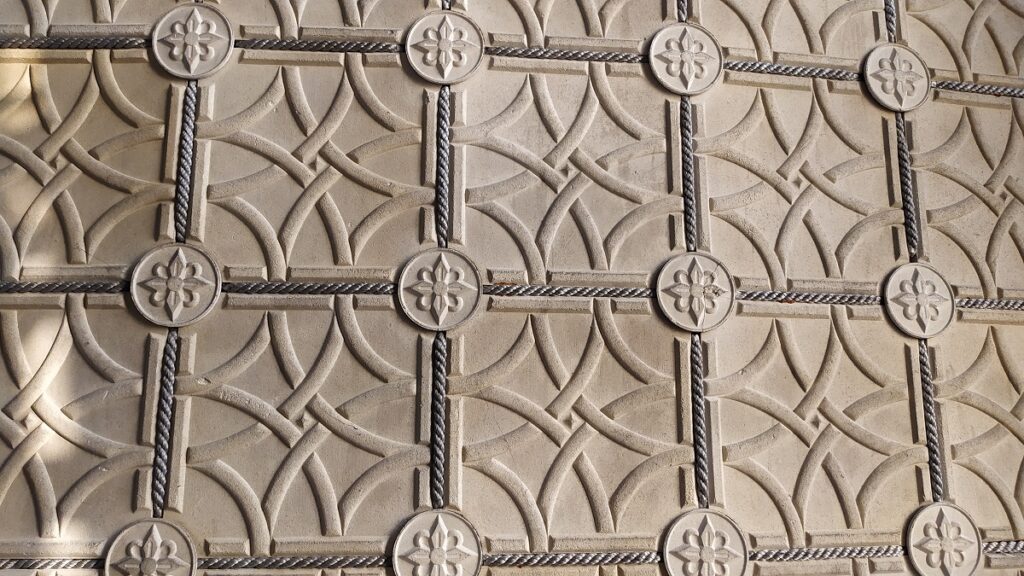 The floor of the cathedral in the altar sections is covered with marble, the rest with stone tiles. A hot water heating system is embedded in the floor. Thanks to the warm floor, in winter people in the church always feel warm, even if the air temperature inside is not very high. And in the summer, the cathedral is quite cool due to natural air conditioning: the thick walls let in heat very slowly, while the warm wet air rises up to the dome and goes out. 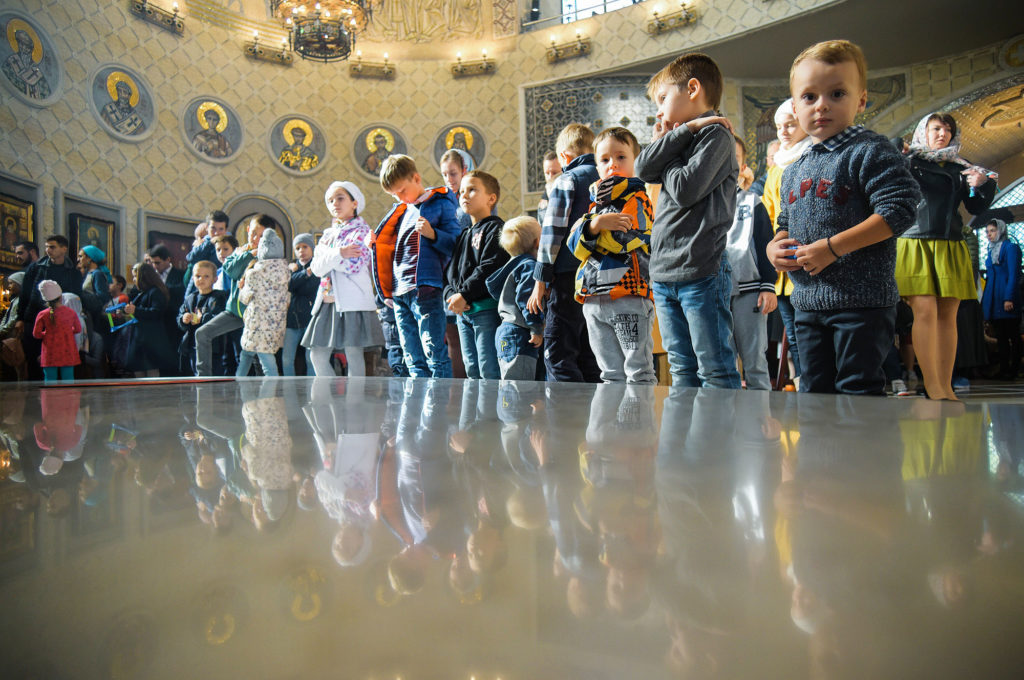 The roof of the cathedral is covered with copper. Copper sheets, folded together at the seams, create a reliable waterproof coating. Water falling on the roof during rainfall is discharged through water pipes inside the walls placed in the thick external insulation. So the outside walls of the temple are not overloaded with extra elements such as downspouts.

The dome of the cathedral is made of combined materials. Because the design called for a spherical dome,  thin narrow wooden rails were diagonally fixed throughout the metal frame, which was then sheathed, covered with copper, and gold-plated. A ventilation sleeve is installed under the cross on the dome, through which warm, saturated air leaves the church. 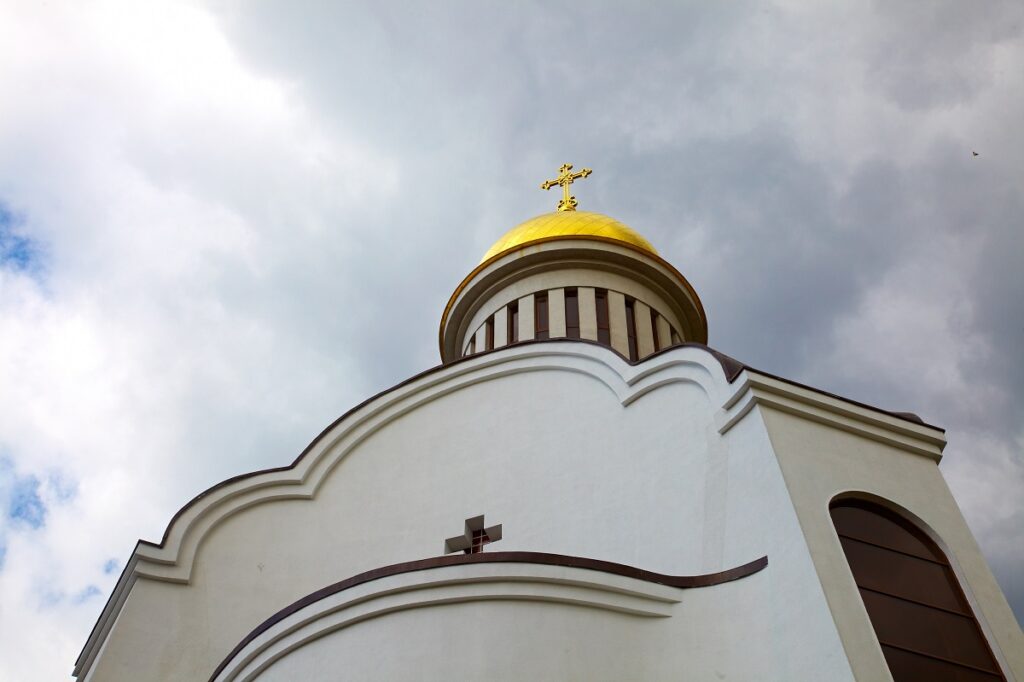 Another technology was used to make the bell tower’s dome. This dome was poured out of concrete. The builders made a metal frame and then made exact patterns of outer and inner radii. The frame and the templates were fixed on the central axis mounted on the construction site. As the templates rotated around the center, the concrete was gradually added layer by layer, and polymers were added for strength and elasticity. Then the dome was polished, primed, and covered with gold leaf. The dome-making process took about two months. 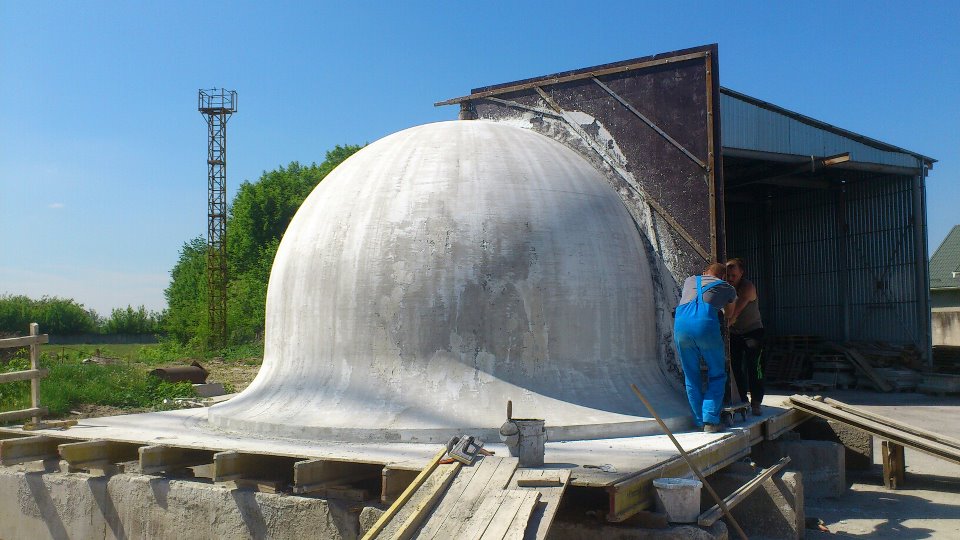 The building of the complex continued after the consecration. The bell tower was completed by the Feast of the Protection of the Theotokos of 2012. It has the largest carillon in Ukraine with 56 bells covering the chromatic scale over more than four octaves. The sound of each bell is surprisingly clean, exactly matching the note. The carillon was manufactured in the Netherlands by Petit & Fritsen enterprise that has been in the business for over 600 years. The weight of the largest bell is 1670 kg, the smallest 5 kg. This is a unique bell tower that has no analogues in the world. When the last bell was being cast, coins collected by parishioners were added to the alloy. Part of the carillon can be played manually, while the full carillon is electronically controlled in connection with a clock. Every hour the carillon plays a short beautiful tune; every day at noon it plays the National Anthem of Ukraine. 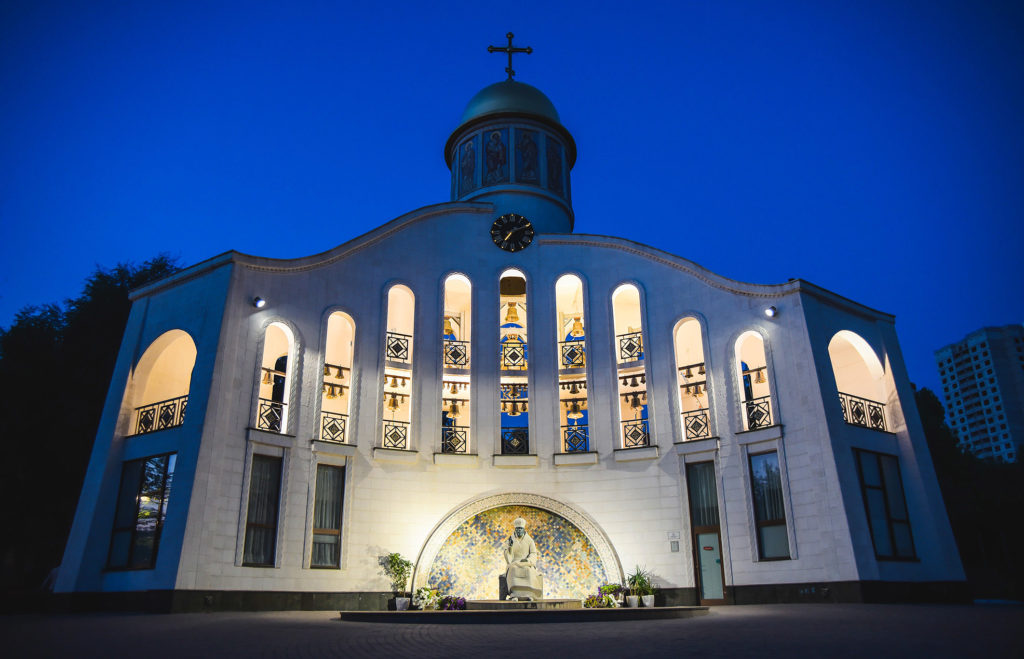 In 2016, the first monument to His Beatitude Metropolitan Volodymyr, who reposed in 2014, was erected in front of the bell tower. His Beatitude sits, resting, in liturgical vestments, his right hand raised for blessing, his left hand resting on the open book of the Holy Scripture. The Metropolitan’s figure is carved of granite; his face, hands, and the cross on his miter are cast in bronze. Sculptor Yuriy Levchenko worked on the artistic design and construction of the monument for about nine months. The monument was carved from a solid granite stone nine tonnes weight. The weight of the monument is 2.6 tonnes. 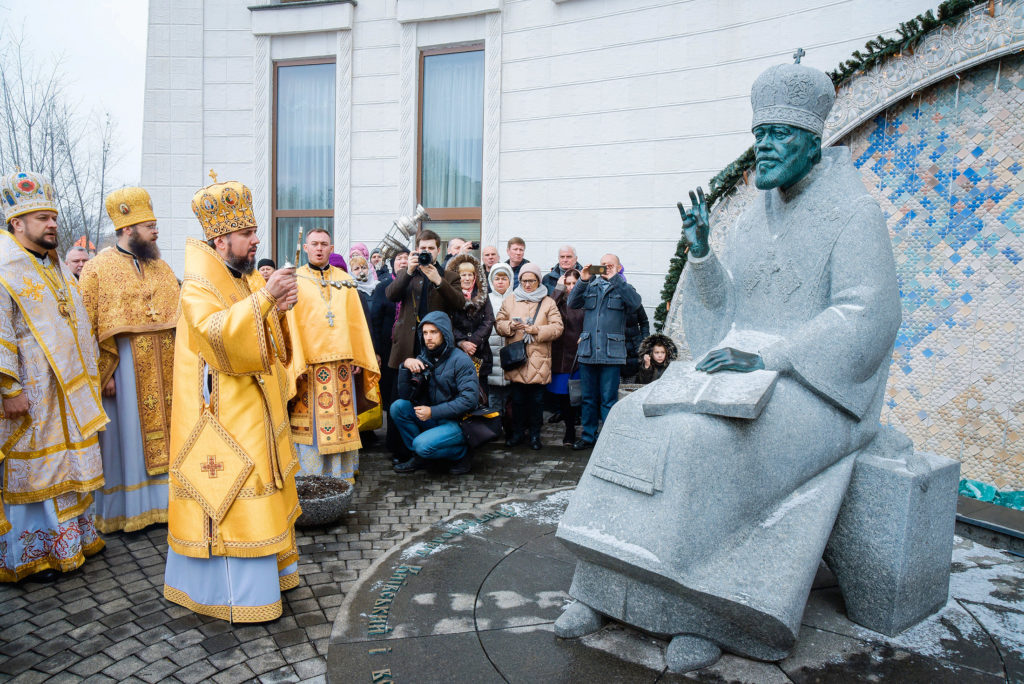