His Beatitude Metropolitan Volodymyr (Sabodan) and His Eminence bishop Alexander (Drabynko). Picture made on the day of the Cathedral’s consecration 13.10.2010.

The Stauropegic Cathedral of the Transfiguration of the Savior was consecrated by His Beatitude Volodymyr, Metropolitan of Kyiv and all Ukraine on October 13, 2010.

Primate: His Beatitude Epiphany (Dumenko), Metropolitan of Kyiv and all Ukraine

Rector: His Eminence Alexander (Drabynko), Metropolitan of Pereyaslav and Vyshneve

Feast day: August 6 (19), the Transfiguration of the Lord. 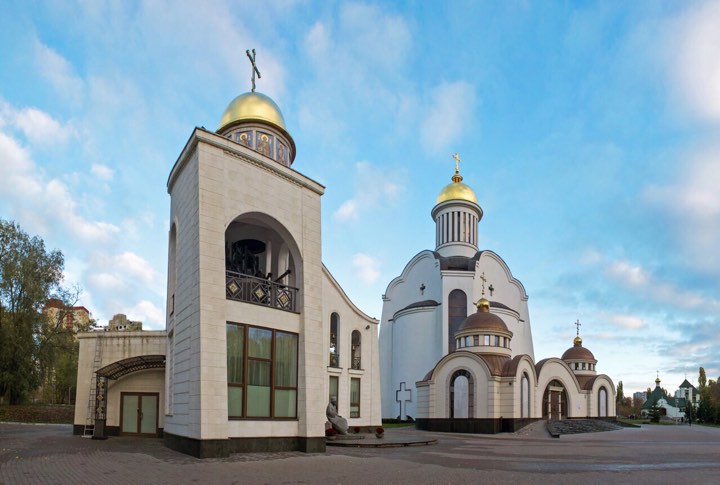 The unique architectural ensemble of the Stauropegic Cathedral of the Transfiguration of the Savior in Elizabethan Park in Kyiv, between the residential areas of Liko-Grad and Teremki-2, consists of a cathedral with two chapels and a crypt, a bell tower, and St. Boris and Glib church. The church complex harmoniously combines elements of traditional Byzantine architecture, features of Kievan Rus church buildings, and modern slim lines, giving it a unique individual style.

The idea for the construction of the cathedral belongs to Parish Council Chairman Igor Lysov, the honorary president of the development company Liko-Holding. The architectural design of the cathedral complex was done by Vadim Zhezherin. The artistic decision and all the mosaics were made under the direction of Yuriy Levchenko. The cathedral has the largest area of ​​mosaics in Kyiv.

Stauropegic is a special status assigned to some Orthodox monasteries, lavras, and brotherhoods, as well as to cathedrals, which translates into submission directly to the Primate of the Church. The literal translation of the word “stauropegic” from Greek is “the erection of the cross.” The classic examples of stauropegic monasteries are the 20 monasteries on Mt Athos, which are subordinated to the Ecumenical Patriarch. From 1592 to 1688 the Kyiv-Pechersk Lavra was also stauropegic under the Ecumenical Patriarch. The stauropegic status of the Cathedral of the Transfiguration of the Savior means that it is not included in the structure of the Ukrainian dioceses and deaneries of the city of Kyiv, but is directly under the patronage of the Primate of the Church.

In December 2018, the cathedral community, led by Metropolitan of Pereyaslav-Khmelnitsky and Vyshneve Alexander and Parish Council Chairman Mr. Igor Lysov, supported the initiative of the Ecumenical Patriarch Bartholomew to hold a Unification Council, and participated in it. The council proclaimed the establishment of the Orthodox Church of Ukraine. On January 6, 2019, Metropolitan Alexander, together with the newly elected Metropolitan of Kyiv and all Ukraine Epiphany, brought to Kyiv from Constantinople the Tomos of autocephaly of the Orthodox Church of Ukraine.